Justabeli - "Cause The War Never Ends to be released worldwide in EU on Black Lion Production
physical copies coming soon! 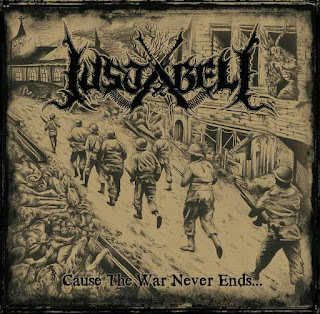 Cradle of filth - "Hammer of the witches old school to the bone! " 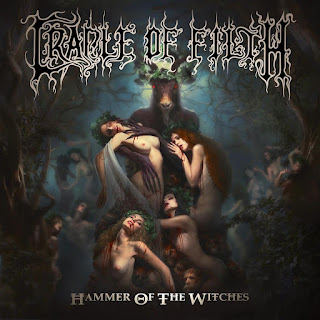 so here I am finally writing what i always dreamed I would one day write! or rather have the privilege to listen to !'
The new Cradle of filth album - Hammer of the witches
first off ! lets talk about the sound, ts very melodic! as I said before its a strong comeback in a way! it sounds very mixed! like a crossing of manticore and cruelty the guitar riffs are all really old school sounding! very much Paul riffs,
I do wish I could hear schoolcraft more! on some tracks her vocals seem a bit in the background,
People keep asking does this sound like Cruelty or Midian my short answer is yes it does live up to that!, very fast and beautiful twin guitar work, l many of the tracks around the end sounds the most the old way, harmonic guitars with brutal screams! the way many people picture cradle of filth back in the days! from let's say Cruelty and the beast

02 Your Immortality this is where the hell ride begins! many people will say it has the same structure like the Abhorrent from Manticore and indeed it does sound like a part II of that song! with more vicious vocals!,
and fast thrash parts,
the twin guitar work of Ashok and Shaw is so tight and perfect its like Iron Maiden!, all over! , Filth's vocals are on its top not that they have been bad!
just quoting dani when he mentioned he want people to sing along not scream along. The orchestral stuff sit nicely in the background but I wish they were more louder!'
same with schoolcraft the vocals are beautiful the drumming is fast and groovy, I really love the drum work on this album, fast blasts beat amazing
groove! one thing I felt was nice is the less crazy splash fills Marthus have a thing for doing they sound great but sometimes it becomes to much!...
so it was nice to have a bit of change!

Moving over to track 3 "Enshrined in Crematoria as we will go back and fourth a lot here so be with me! what can i say its where I wanted things! to go when  I heard the drums, the intro was right away reminding me of Bitter sweet succubus style of guitar and drums ! like a powerful born in a burial gown part II

I say part 2 because they fit together so well, don't worry we are getting to the more dusk midian parts later :p
Enshrined is another amazing display that shows cradle mean what they say about back to the roots with this album! fast organic thrash parts, and full energi,
the fact that It prooves that Rich and Ashok mean what they say! about bringing cof back to what they were!
a lot of cool guitars sweeps has been nicely blended in !
really a new wave of British Metal! some of the riffs in track 3 has the really her ghost in the fog feel...

04 Deflowering next my god what a good track!
that has to be one of my favorite! of the whole record!
yes its because its purely the dusk and her embrace feel! all over!
along with Cruelty bits thrown in!
its like you could cut out riffs here and there from the songs and you'd be close to this one! yes indeed that good!

you can feel the vibe burning inside, as if dani was screaming this one live!
2:26 thats where everyone will go did I just listen to the next part of cruelty brought thee orchids , yes you did that particulair riff part is very known in Cradle,
Deflowering I think will please a lot of people if they already haven't heard it,
many riffs sounds like Born in a burial gown part II

I know I keep going with this it purely is a way for me to better paint a pitcure of how I think!
04 Deflowering next my god what a good track!
that has to be one of my favorite! of the whole record!
yes its because its purely the dusk and her embrace feel! all over!
along with Cruelty bits thrown in!
its like you could cut out riffs here and there from the songs and you'd be close to this one! yes indeed that good!

you can literally feel the vibe burning inside, as dani is screaming this one live!
2:26 thats where everyone will go did I just listen to the next part of cruelty brought thee orchids , yes you did that particular part is very common in Cradle,
Deflowering I think will please a lot of people if they already haven't heard it,
many riffs sounds like they were from Bitter sweet ep/album

Track 5 is up a beautiful dark epic tale, Blackest magic in practice, the dark growls of mr filth that is more common towards midian , this one really brings back born in a burial gown feel in the beginning the fast thrash riff!
and the classic tremolo parts
the orchestral parts are stronger here,
so thats nice! I thought they were lost somewhere behind!
but they found their way back,
the album has a lovely feel of old and new cradle mixed, I haven't said it before,
the song titles are very nice! A vampire at my side! does what it should!
dark symphonic and beautiful! the album is a like a twin album to midian in the sense that the twin guitars are so prominent and perfectly done, that they could very well be from midian same with the keys! if you listen to the song king of the woods then listen to cthulhu dawn, or saffron curse then you'll understand!
If had to compare this album without bothering on the modern sound!
I would say the albums it sounds the most similar to are!
1 Cruelty and the beast
2 Bitter sweet succubus
3 Midian
4 Dusk
5 Manticore
i give it 9/10 An excillent return of the old school cradle

Posted by NORDIC METAL at 00:57 No comments: