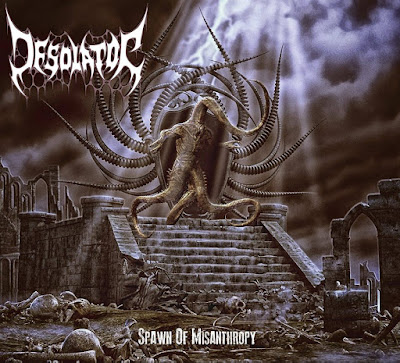 Now and Then I get these amazing pearls like Desolators new ep Spawn of Misanthropy
meaning those ep/albums where everything is perfect! what we have here is some of the best death metal coming neutrally from Stockholm Sweden the home of extreme metal,
although the sound is more similar to the american scene! of early 90s
Baphomet, Dismember , and some part even slight early in flames, perhaps mostly the use of tremolo picking guitars alongside ferocious riffing of the rhythms ,
Spawn of Misanthropy is a real feast for the death metal heart! every track has that in your face vibe, I would not have guessed this came from Sweden unless someone told me.
The sound of this little ep is just far beyond amazing.
the songs are mixed from fast blasts to more slow groovy the ep still deliver strong and its the american old school death metal sound that I personally love!

from start to Finish the album delivers strong without compromise Desolator are no new comers in death metal and you can tell how well each song is written, the guitars sings beautifully along with the drums , for fans of bands like mentioned above this is a real treat
for the listeners, everything about this album is just perfect ! its one of those record like last years Terminal reckoning by Incision thats stands along.
this macabre and astonishing release. its sort of takes the listeners into a trance kinda with its powerful feel nothing for the newcomers perhaps but something all Death metal fans of ether 80s or 90s will enjoy! 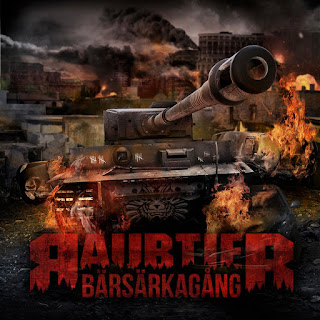 The album “Bärsärkagång” by Raubtier has recently come out and it's full of energy. The musical style of Raubtier is easy to recognise here with the clear articulation of the lyrics, the northern accent and the way some of the songs tenatiously stick to the brain. The lyrics are mainly focused on the pride, the survival instinct and sense of duty of northern warriors and hunters.

“Den sista kulan” Faces a heavy subject as it tells us of someone who has prepared for his last stand as he has saved his last bullet for himself. It's a moving story and the song is Definitely one of my favourites.
My other favourite is “Brännmärkt”, a song about prosecution and facing conformity. It's a catchy song with a striking intro, and it's strangely relatable.
I liked “Röd snö” for its chorus. There's just something about the way it sounds that puts the listener right in the mood of the song.

I'll have to give this an 8 out of 10 because not all of the songs blew my mind, but in all I think the album was good enough to live up to the Raubtier standard and I can imagine these songs being fantastic live. Some would even be just as good acoustic. They have a good use of language and  The songs are worthy of playing on repeat and it's a lot of fun singing along with the lyrics.

Posted by NORDIC METAL at 12:13 No comments: 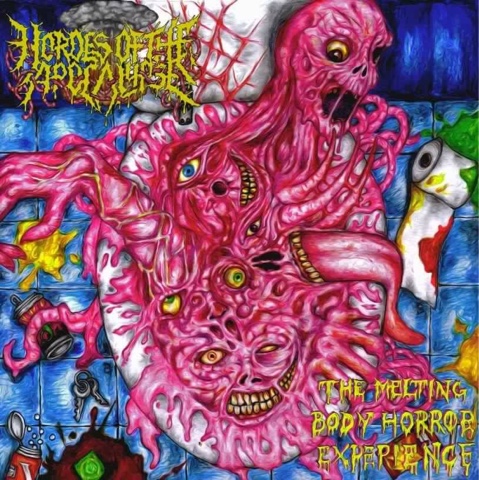 Not many of you knows about this, but we have to reviel it; since Feb 13th we've been done with a 7-track EP. Soon enough It will get released on CD with two different cover-arts and this is the second one, made by Tim Nordstedt:
Posted by NORDIC METAL at 01:48 No comments:

Hordes of the apocalypse – By sword, by pick, by axe, bye bye 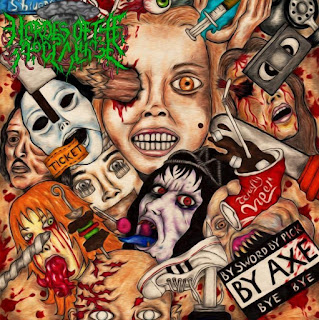 Hordes of the apocalypse – By sword, by pick, by axe, bye bye

From the very first moment of the first song I'm thrown back into the 70's and 80's with their silly, yet gruseome style of horror and frankly excellent guitar riffs. There is an ongoing theme of old fashioned, Voodoo type zombies and dark, immersive settings, and the artwork is beautifully grotesque.


If there's one thing I would like to criticize it's their English. They use a nice, large vocabulary, but at times they could work a little on the grammar. It's understandable to use a bit of artistic license when writing lyrics, but none of the grammatical errors here seem intentional. There is however no doubt they can improve on it with a bit of effort.
Over all it's a nice homage to the old horror movies, and a time when rock music and metal was at it's finest. Rough, with a lot of ambition, it is often the simple things that are the most efficient. This band does a good job of entertaining the listener and of painting a picture with their music.

I'll give it a 8 out of 10 for its strong sense of nostalgia and for its colourful and strikingly dramatic artwork, but next time, do a triple spellcheck because the slightest error can risk taking away from the immersion.

Posted by NORDIC METAL at 13:54 No comments: 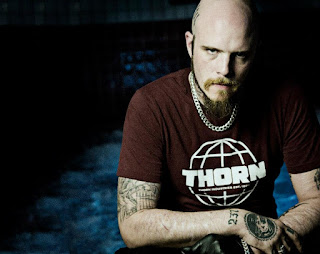 Special Thanks to
Patricia Thomas Mangement !
for the help  and arrangement!
and Thanks to Gunnar of Season of mist!
Posted by NORDIC METAL at 21:27 No comments: 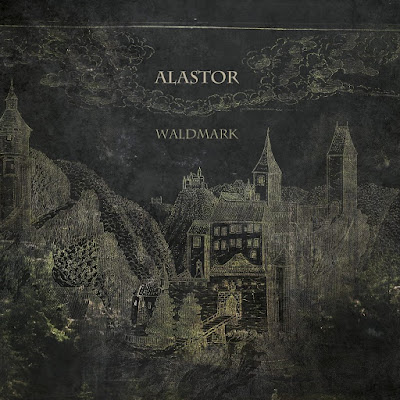 Alastor is the modern expression of that old school 90's black metal. The cold guitars, roaring drums, pulsing bass and wrenching vocals tipped off with chilling choirs and keyboards. The atmosphere of songs like "Fellwood" and "Old Glacial Lake" really bring you back to that original black metal sound with the dark, demonic guitar riffs, tremolo leads and the drums are beefy, clear and tight as fuck. The songwriting on this album is flawless with perfect transitions, huge sections and every riff makes me want to bang my head! I also really enjoyed the clean vocal narrations a that gives a bit of a break from the traditional black metal vocals. The range of the vocals is very impressive as well from ear piercing highs to full lows. The track "Lord of the Bohemian Forest" is by far the most epic track on the album in my opinion. The clean vocals towards the middle and melancholic guitar

melodies really bring an atmospheric feel to this song for me, my favorite on the album. There is even a clean guitar intro in the song "Alpine Obscurity" which also features an intro with the drums and bass accompanying the clean guitar and it just works so well. The production on this album is perfect for the genre. The vocals and guitars are very clear, the kick drum clearly cuts through all the other tracks and the drums are thunderous. Also you can actually hear and feel the bass guitar and the rhythm has a really nice low balance to it which enhances the riffs quite a bit! The choirs and keyboards are there but not overwhelmingly loud like a lot of black metal, they are more of a supporting element to the epic guitar riffs. Overall amazing album from Waldmark, cant wait to hear more!
-Caleb 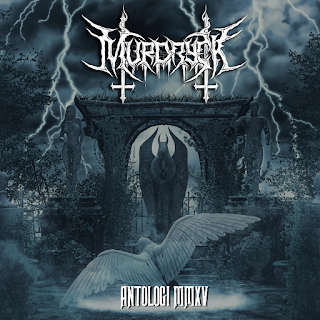 A tasty blend of Blackend death metal with elements of Symphonic metal,

Posted by NORDIC METAL at 23:44 No comments:

PRE-ORDER the new ALASTOR album "Waldmark" now for an incredible price from https://winterblasthalls.bandcamp.com/merch/wbh-v01-alastor-waldmark

Item will ship out around 1st of May!
ALASTOR is a black metal band from Austria which has already been around for 20 years. They can be considered an essential member of the local underground scene by now. ALASTOR play a classic style of black metal with only some modern aspects. I would compare it to something like Satyricon on "Volcano", if I had to.

"Waldmark" will be released on black vinyl in fully coloured cardboard sleeve on the 1st of May 2016. You can already pre-order the vinyl from our bandcamp page for the ridiculously low price of 11€...but be quick - only 30 copies are available before the price goes up! (It will still be a better deal than after the release date but surely not as aswesome as the 11€ offer)

The pre-order includes the immediate download of the full digital version from bandcamp, so you can already listen to the original master files while you wait for the vinyl to be shipped!