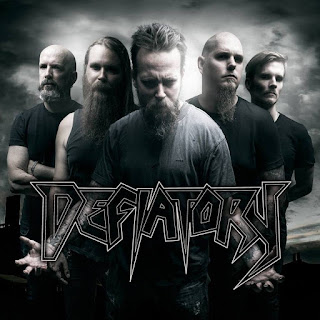 Swedish Bay Area Thrasher DEFIATORY Unleash first teaser for upcoming video King In Yellow taken of their new album Hades Rising Out Now!
with two full length's now under their belt and new shows coming up
Defiatory is gearing up for their new release of the track King In Yellow taken of their new jaw breaking album Hades Rising a total must have for any Thrash or Death Metal fan for the matter. with glowing reviews all over the globe and fantastic reception of their comeback album Defiatory present their first little glimpse into the world of KING IN YELLOW, the video is directed and produced by Standard Film Team Sweden.

Check out the Video Teaser below!


Posted by Nordic Metal Music at 22:16 No comments: