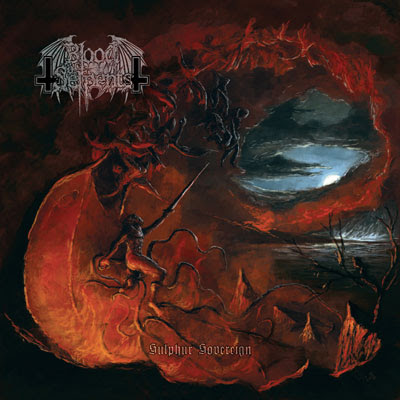 Tracklist:
01. Mater Tenebris
02. In Darkness, Brotherhood
03. Devil's Tongue
04. Evictor Of Christ
05. As The Temple Burns
06. Canticle
07. As Nocturnal Dimensions Beckon
08. Upon Waters Dark
09. Prophet Of A False Faith
10. A Void Between Worlds


Black metallers Blood Of Serpents hails from the deep forests of Småland, Sweden, and Sulphur Sovereign is the bands' second full length album, and the first one featuring drummer Christoffer Andersson and vocalist Thomas Clifford known from Throne Of Heresy and Abscession. The band debuted in 2012 with the EP Leave You To The Flies, which was followed in 2013 by the second EP Mind Made For Murder and finally in 2014 by the debut full-length Black Dawn.
The new album Sulphur Sovereign is slated to be a standout black metal release of 2018 and upon hearing the first track it becomes clear what we are in for, this is pure crushing evil black metal, without leaving to much room for melodies, but yet there's some space for some indulgent impeding melodic patterns that arise from the shadows to make everything a bit more audacious, with all this the band carriers forward the style that has a lot in common with bands such are Marduk, Belphegor, Funeral Mist and Dark Funeral.

The thing that made me fall in love with this record is the sound intensity and the speed, mostly because I'm a huge sucker for bands like Marduk or Belphegor and it's quite clear that fans of those bands will love this album. Each one of the tracks on this album breaks the standards of today's black metal production. Blood Of Serpents know clearly what they are doing in terms of building up the hype and mystery surrounding the album, just listen for example to the majestic almost epic track  "As The Temple Burns" and you'll understand what's my point.

Each track brings back memories of the good old days when albums of black/death metal pioneers like Belpegor, early Behemoth, Endstille,... were dominating the scene with their ferocious uncompromising black metal. Blood Of Serpents with Sulphur Sovereign have released that kind of an album that will change the scene for the better with raging guitars, insane drums and harsh vocals from the depths of hell.
The band offers throughout the album very dense and rich sound that reminds in the first place especially to Marduk's early output Frontschwein or Serpent Sermon. So, I think that you understand what are you in front of and if you are a fan of the bands mentioned above then Blood Of Serpents new album Sulphur Soverreign will be your lucky hit for sure! The album drops on 25th of September so be sure to not to miss out this majestic album from these Swedish black metal masters. This is an anti-theistic opus for those who see through the thin veil of religious servitude, it's an album that in the first place draws on a respectful Swedish black/death tradition, but yet it's not just repeating the old patterns.


Review written by: Oliver
Rating: 8/10
Posted by Nordic Metal Music at 15:23 No comments: