CRADLE OF FILTH: We wanted to make an old school ‘Cradle of Filth’ album
UK’s Extreme Metal icons- Cradle of Filth‘s axe man Richard Shaw sat down to chat with us about their new album and the future plans and how things have been with COF all these years. The new album- Cryptoriana – The Seductiveness Of Decay (2017) is now officially released via Nuclear Blast Records worldwide. Excerpts: re post from MJM Magazine by Oliver /Harsha

MJM. Hello Richard Shaw, thanks for taking the time to talk with us! How are you doing today?

MJM. Your new album ‘Cryptoriana – The Seductiveness of Decay’ comes out September 22 and I personally must say it’s one of my favourite COF album.

Richard: Thank you very much. I’m glad you like it. We enjoyed making it and we’re really happy with the fan and critic response so far.

MJM. A lot of fans and Media are saying that the new songs are way more melodic then previous discography which makes them think of material from Cruelty and the Beast, Dusk and Her Embrace; with a more modern approach is that something you’ve intentionally did with this album or was it just natural progression?

Richard: Half and half I’d say. When Ashok and I joined the band in early 2014 and was asked if we’d contribute to the last album, ‘Hammer of the Witches’, we wanted to make an old school Cradle of Filth album but with a fresh approach. We feel we achieved that on the last album and it was received well by the fans. We began writing that album when Ashok and I had only been in the band a few months, whereas on this album we had been in the band a few years. We know each other a lot better now and we know how far we can push each other’s abilities, whether it be songwriting or technical. We definitely wanted to make a more cinematic sounding album and I think we pulled it off. 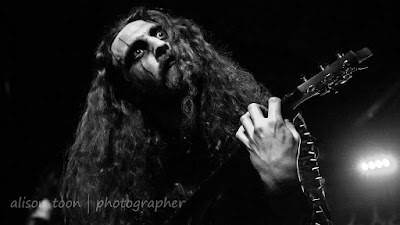 He happened to be reading a lot of Victorian literature at the time, and was heavily influenced by the Victorian obsession with death and the occult.

MJM. Cradle is known for doing brilliant concept albums and with ‘Cryptoriana…’ being described as infused with Victorian Gothic horror, how did that idea come to mind?

Richard: That was an idea that Dani came up with later in the album writing sessions. Musically the songs were nearing completion when we were finalizing the arrangements in Brno, Czech Republic when Dani realized he needed to begin writing lyrics (other than ‘Achingly Beautiful’ which he had left over from the previous album sessions). He happened to be reading a lot of Victorian literature at the time, and was heavily influenced by the Victorian obsession with death and the occult. It seemed a natural fit to the music we were writing.

Dani has over 900 film soundtracks in his collection

MJM. On this album you also featured Liv Kristine known from the Nymphetamine era; how did that idea came about? And what did she bring to the table this time?

Richard: Lindsay came in to record her vocal parts and something wasn’t quite clicking with that song. I’m not saying Lindsay didn’t do a good job on the song, it’s just that that particular song required a different kind of vocal approach. Scott (our producer) suggested Liv, and she was happy to be a part of it. It’s a nice little homage to Cradle of Filth’s past, while at the same time, this is a very different song to ‘Nymphetamine’.

MJM. Dani had earlier mentioned that the band is deeply inspired by movie soundtracks. Which are your 5 favorites that you cannot stop loving?

Richard: I think; we all love film soundtracks, but Dani and I are probably the biggest fans. Dani has over 900 film soundtracks in his collection, I have nowhere near as many. My top five (off the top of my head) would be:

MJM. You joined the band quite recently. How do you share your relationship with the other members?

Richard: We all get on really well. We seem to gel musically and personally. We all have our own little quirks and idiosyncrasies that we respect and we get on great.

MJM. Tell us about your older projects and the bands you played prior to COF.

Richard: As a session musician, I still play guitar for orchestras and musical theatre, as well as playing guitar for local pop singers. I play for a karaoke band and an acoustic covers band. My two old bands, Emperor Chung and NG26, unfortunately are not as active as I’d like them to be, as we are all so busy (me especially) that it’s difficult to get together. I tend to now fit in one off projects between Cradle of Filth tours.

MJM. This is your sixth album where you’ve worked with producer Scott Atkins. What new ideas did he bring to the table this time, I understand you guys are also working with Scott for Devilment?

Richard: He’s a great producer with an incredible ear. He’s a guitarist too so he knows exactly how to get the best of me and he knows what makes a great player play at their best. He’s also great at trimming the fat, getting rid of parts that are simply unnecessary. He has the big picture in mind. He has worked with Devilment too. It makes sense. Dani has found a producer that really understands what he wants but at the same time really pushed him to deliver more than what he feels he’s capable of.

We’d go over the songs for a few hours a day and then just hang out and simply be friends the rest of the time. Like a Cradle of Filth holiday/ team building exercise.

MJM.  Let’s talk about the artwork for this record, Cradle is known for its exquisite art and detail, I understand you continue to work with Artūrs Bērziņš, who also directed the video for “Heartbreak and Séance” How did that relationship start?

Richard: From what I gather, Dani was introduced to him when we were looking at artists for the ‘Hammer of the Witches’ album. He did the artwork for that album and did an incredible job, he’s simply fantastic. We knew we wanted him to do the artwork for ‘Cryptoriana….’ but he mentioned that he’s also a film director. Once we saw some of his work, we knew he was the perfect choice to direct the ‘Heartbreak and Seance’ music video.

MJM. How did the writing process for the new album go about this time around? I read somewhere that you went along with the filths to some Team building weekend in Czech Republic could you elaborate more on that?

Richard: We had been writing by ourselves for some months before we went to the Brno in the Czech Republic. We tend to write whole pieces of music by ourselves. Martin brought in three songs, Daniel, Ashok and I brought in two songs each. Then over a period of months we discuss the notes and chord progressions but the we got together in Brno (where Martin and Ashok live) to finalize the arrangements face to face while Dani started working on the lyrics. That week was great. We’d go over the songs for a few hours a day and then just hang out and simply be friends the rest of the time. Like a Cradle of Filth holiday/ team building exercise. 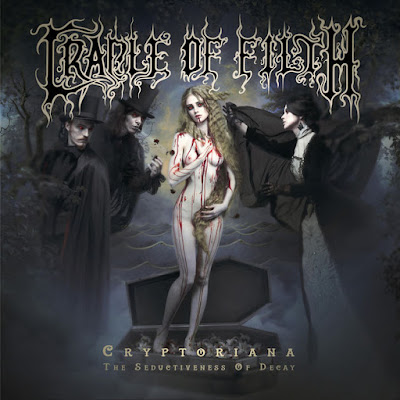 http://www.nuclearblast.de/en/label/music/band/discography/details/4798088.216100.cryptoriana-the-seductiveness-of-decay.html
Posted by Nordic Metal Music at 16:13 No comments: