Insision - Terminal Reckoning : A rare pearl among the many 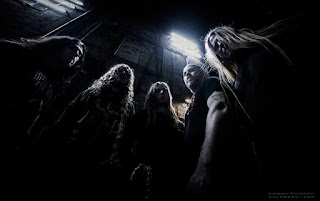 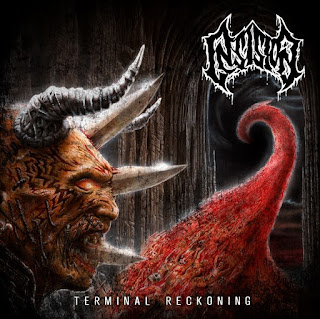 Insision
is a death metal band from Stockholm Sweden
formed in 1997
what we have here is probably one of the sickest album to date! I have observed,
this is their 4th studio album the album has a clear dark and old school sound Terminal Reckoning is a death metal band with influences going all from old school death metal to more brutal death metal, album straight back to the early days of death metal glory,
with tremolo picking and high pitched guitar solos, and shredding like gods its hard to not love this work of art , the guitar work is brilliant and sometimes even mesmerizing.
the album
Low tuned guitars and guttural vocals, the list is complete for a perfect death metal album, sort of, although one might think the whole grinding and such is a lot it fits the songs so well! ,
the album feels like a mix of old school and more modern brutal death metal but in the end its what it is Death fucking Metal to mange your mind!, if I may quote Giovani from Depressed,
what you see is what you get nothing less, stone crushing chugging guitar riffs, and hard hitting blast beats .Most of the albums sound reminds  me  of Suffocation classics like pierced from within, Effigy of the forgotten those kind of pearls that only are rare to come by these days..  The album has a clear crisp sound  , no so extremely polished as todays music is,
the songs are catchy and not at all hard listen to !
although its only 8 songs these roughly 35 minutes feels almost to short.
I think so far my favorite track is number 6 Cold Air an intense little tune grind to to the masses ! Ibbe shows up amazing skills behind the kit !
catchy and groovy is just a small words to describe this album!
every song is just pure death metal a real kick in the face to all melodic stuff that has come out of  Sweden! the past years!.

The whole album  has a sound hailing back to the early florida death metal scene!
with songs like Infected Shapeshifting and my favorite Old Ways .when listening back to the older albums you can still so to detect that this is what is coming next ! not in a bad way , on the other hand it's perfect, it really builds up itself , although the expectations are sky high the band delivers without compromises.
roughly 35 min of pure death metal grind
Terminal Reckoning is the bands 4th full length album and rumors says it will be their final?
its a clear  9/10 rare but it does happen that album come in that definitely just blows you away!
I say if you are into bands like Suffocation,and such this is just a record you must check out!

External Links
for the band